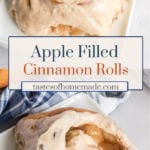 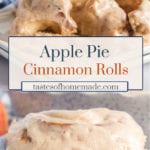 These apple pie cinnamon rolls take the traditional cinnamon roll to a whole new level. These gigantic rolls are filled with apple pie filling and cinnamon and are topped with a cinnamon cream cheese frosting. And they are ready in under 2 hours!

Cinnamon rolls are such a decadent, delicious treat. From the soft dough to the warm, spicy filling, and finally the sweet, drippy cream cheese frosting.

I love everything about cinnamon rolls.

Now, while regular cinnamon rolls are just fine as they are, I decided to play around a bit with another dessert I love. Apple pie!

Instead of the traditional brown sugar and cinnamon filling, these rolls are filled with apple pie filling. And let me just say, the apple pie filling creates a roll that is extra gooey and extra delicious.

Then I changed things a bit more by adding some cinnamon to the cream cheese frosting.

After all that, I cut them into extra-large rolls, because if you are going to indulge, you may as well do it right.

Looking for some other fun twists on a cinnamon roll? Try these maple bacon sticky buns or these pumpkin cinnamon rolls.

HOT TIP: Chopping the apples into smaller pieces will help these roll better. I simply dump them into a bowl and run a butter knife through them a few times.

Make sure to serve these warm!

Can I substitute active dry yeast for quick rise yeast?

Yes, you definitely can. To do this, add 1 tablespoon of yeast to a small bowl with 1/4 cup of the hot water and 1 tablespoon of the sugar. Let this sit for about 5 minutes until foamy, then proceed with mixing the remaining ingredients as directed. Rise time will approximately double for each rise.

Can I use whole wheat flour instead of all purpose flour?

You sure can. Start with 3 cups of flour and only add more as needed to form a soft workable dough. Whole wheat flour will result in a slightly denser roll.

Can I freeze homemade cinnamon rolls?

Yes, you can. However, you will want to freeze them without the frosting. Simply store the cooled rolls in an airtight container. Before serving allow to thaw and then frost. If you want to warm them up first place them in a baking dish, cover with foil, and warm in the oven at 350 for about 10 minutes. 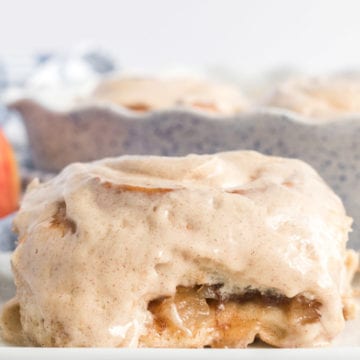 Tried this recipe? Please leave me a comment or rating to let me know!

Pin this recipe for later!

You knocked it out of the park again! So decadent

Thank you so much, I'm so glad you enjoyed them. They really are a decadent treat!

Thanks for the easy to follow instructions. Can't wait to try them!

These look amazing! It's basically two of my favourite desserts, all swirled together in one ooey-gooey bun. Pinning these to try out next weekend.