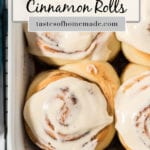 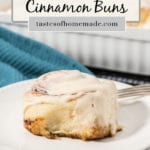 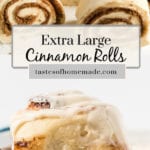 There really is nothing better than Christmas morning filled with the scent of freshly baked cinnamon rolls. It is tradition that they are placed in the oven as soon as we get up. Then we put the coffee on, turn on the lights and gather around the tree. Only when the cinnamon rolls are out of the oven do we start opening our gifts, nibbling bites of the fresh baked rolls in between presents.

These cinnamon rolls are extra large, extra soft and extra gooey. Filled with rich brown sugar and cinnamon and topped with a delicious cream cheese frosting. If you have ever had, and loved, the cinnamon rolls you get as you are walking through the mall then you will love these.

I’ve been making this recipe for as long as the tradition started. Originally it came from a Company’s Coming cookbook and I’ve adapted a bit over the years.

Can you make cinnamon rolls ahead of time?

What I love about this recipe is that you can make it ahead. Yes, that’s right. You can let these rolls rise overnight and bake them in the morning. And nothing gets you out of bed quite as fast as the smell of freshly risen cinnamon rolls wafting through the house.

Here is the best part. You do not have to spend all afternoon Christmas Eve preparing these for Christmas morning. I prepare these a week or two before Christmas, when things are less chaotic, then before the second rise I freeze them. Before bed on Christmas Eve I take them out of the freezer, place them in the pan, cover with a towel and walk away until morning.

They will taste exactly the same as if you’d done all the work the same day, but you don’t have all the mess to clean.

In the morning, while the rolls are baking, I whip up the frosting. And as soon as they are done baking we dig in.

Start by combining the yeast with 1/4 cup of the water and 1 tablespoon of the sugar in the bowl of a stand mixer. Let this sit for about 5 minutes until slightly frothy. If your yeast does not start to froth it means it is dead and your rolls will not rise.

After proofing the yeast, add the remaining ingredients (reserving half a cup of the flour) and turn the mixer on low until combined, then increase the speed and allow the machine to knead the dough for about 7 minutes.

After about 7 minutes the dough should have come together and pulled away from the sides of the bowl. It might still feel a bit sticky, but should be mostly smooth and stretchy.

Turn it onto a floured surface and knead for a minute or two until smooth and elastic, adding a bit of extra flour if it is too sticky. Then turn into a lightly oiled bowl, cover and let rise in a warm place until doubled.

Once the dough has doubled in size, turn it out to a floured surface.

I like to use a pastry mat as it is non stick and helps keep the counter clean. If you don’t have one, then flouring the surface of your counter is sufficient.

Gently roll the dough into a rectangle about 24 inches by 14 inches.

Then spread the butter all over the dough, leaving 1 inch on the edge furthest from you. This will help the dough to seal when rolled.

Starting from the side closest to you (the long edge) roll the dough into a log and pinch the seam closed.

Cut into 12 rolls, approximately 2 inches wide. Then place in a pan lightly sprayed with non-stick spray, or a thin coat of butter.

Leave approximately 2 inches between the rolls to allow for room to rise.

If you want to freeze these to bake later, you will stop here. After cutting the rolls place them on a baking sheet lined with parchment paper and place in the freezer. As soon as they are frozen transfer them to an airtight container to store until ready to bake.

Cover and place in a warm place until doubled in size, about 2 hours. Then place in a 375 degree oven and bake for 25 minutes.

While the rolls are baking you can mix your frosting ingredients. Allow rolls to cool for approximately 5 minutes, then frost as desired.

Serve cinnamon rolls warm with butter or extra frosting on the side. 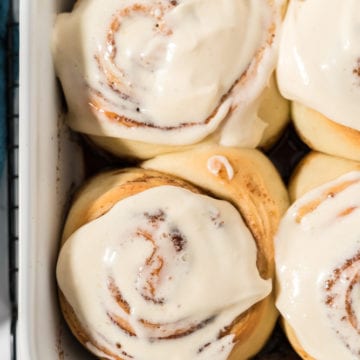 For the Cream Cheese Frosting

Absolutely beautiful, great recipe and instructions, thank you for sharing

These were excellent! This was the 1st time I have ever made cinnamon rolls, Although I bake bread and dinner rolls regularly. The recipe was very easy to follow and understand thank you.

I have baked these on a cookie sheet before when I made a huge batch and ran out of 13x9 pans. It does work, but they tend to spread outwards a bit more, so will be slightly flatter than baking them in a pan. But if that doesn't bother you, then it will work fine.

I made these Cinnamon Rolls and they turned out perfect!! My husband and I love them!! I will definitely going to make this recipe again!! 😊❤

Good Morning, Made these yesterday and today (started the process yesterday and baked this morning). When I let them proof a second time, I left them in the oven overnight. Not sure if this was the issue but I found that they did not rise anymore overnight or while baking. I also found that they seemed to spread a little. I normally bake them side by side but these I let space between thinking they might rise when baking. Haven’t tasted yet but I’m sure their delicious. Just didn’t get the size I was hoping for.

If they are not rising the way they should during proofing it is generally because of the yeast being past its prime. This has happened once when I realized I used an old jar that was at the back of my fridge instead of fresh yeast. That was a sad Christmas morning. And I had the same result you are describing with spreading rather than rising. With fresh yeast, you should definitely get a doubling of size once they are in the pan and a bit more during baking. Sometimes though, atmosphere plays a role. Colder, dryer weather can cause a slower rise while humid warmer weather will cause a faster rise. But if you had no rise at all after rolling and cutting then my guess is that the yeast is to blame. Hopefully, they still taste great and you have more luck next time.