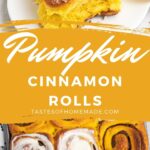 These pumpkin cinnamon rolls are super soft and delicious. Made with a sweet, brioche style dough and filled with pumpkin and warm pumpkin pie spice they are the perfect blend of cinnamon rolls and pumpkin pie. Topped with cream cheese icing these rolls make a nice breakfast treat perfect for fall.

THIS POST MAY CONTAIN AFFILIATE LINKS. AS AN AMAZON ASSOCIATE, I EARN FROM QUALIFYING PURCHASES.

Cinnamon rolls are a popular brunch addition. They are usually made with a soft yeast dough that has been coated in sugar and cinnamon and rolled to produce soft, squishy buns with a gooey cinnamon swirl.

There are endless variations of these delicious rolls. This recipe uses pumpkin puree, along with a brioche style dough, for a soft, slightly sweet roll that is light and moist.

Then the filling is made with pumpkin puree, brown sugar and pumpkin pie spice for tasty swirls that are reminiscent of pumpkin pie.

The warm rolls are then topped with a simple cream cheese frosting for the perfect fall treat.

Why We Love This Recipe

Simple ingredients – This cinnamon roll recipe is made with simple, pantry ingredients. You don’t need anything fancy to make these delicious rolls.

It’s easy – As far as cinnamon rolls go, this recipe is quite easy. Because we are using a stand mixer to make the dough it is mostly hands off. However, directions have been included if you prefer to make them by hand.

It is delicious – This recipe produces soft, delicious rolls that taste like a combination of cinnamon rolls and pumpkin pie. They are perfect if you love pumpkin and a nice alternative to the traditional cinnamon roll.

To make these pumpkin cinnamon rolls you will need:

Begin by warming the milk to about 110°F (it should feel warm, not hot) and add it to the bowl of a stand mixer along with the yeast and sugar. Let sit for about 10 minutes until frothy.

Next add the salt, half cup of pumpkin puree, egg and milk. Using the dough hook attachment turn the mixer to low to mix the wet ingredients, then gradually add the flour.

Once most of the flour has been incorporated, cut the butter into small cubes and add to the mixer. Turn the mixer to medium speed and allow it to mix for 8-10 minutes until you have a smooth, soft dough.

Pro Tip – When you first add the butter to the dough it is going to seem very sticky. Just let the mixer do its job. As it kneads the dough it will pull away from the sides and come together to form a soft ball.

When the dough is soft and elastic turn off the mixer. Turn the dough out onto the counter and knead it a few times and form a ball. Then return to the bowl, cover and let rise in a warm, draft free place until doubled. This will take between 1-2 hours depending on how warm your house is.

Once the dough has doubled, turn it out onto a floured counter or pastry mat and roll out to a rectangle of about 15×12 inches. The long end should be facing you.

Mix the ingredients for the filling and spread over the dough leaving 1 inch on the long edge furthest from you bare.

Starting from the long edge closest to you, roll the dough to form a log.

After the rolls have risen, bake at 375°F for approximately 25 minutes until golden brown.

Remove from the oven and ice as desired before serving.

Making Dough Without a Mixer

If you don’t have a stand mixer that isn’t a problem. These cinnamon rolls can easily be made by hand, they just take a bit more work.

Honestly, I find it extremely therapeutic to knead dough by hand, so when I have time I often forgo the mixer in favour of hand kneading.

Without a mixer you will follow the same directions to warm the milk and proof the yeast, then stir in the salt, pumpkin and egg.

Once the wet ingredients are mixed, add the flour and stir to combine until it forms a dough, then turn it onto a floured counter and stretch it out a bit to form a small squarish shape.

Cut the softened butter into cubes, place them onto the dough, then fold the dough over and begin to knead the butter into the dough. It will become very sticky at this point. This is normal. You can add a tiny bit more flour if it is sticking too much to your hands, but try not to add too much. As you work the dough it will become less sticky.

You are going to knead it for 10-15 minutes. As you work the dough it will become soft and smooth and should no longer stick to the counter. Keep going until you have a soft, supple dough. Then form it into a ball, place it in a bowl and let rise.

Can I make cinnamon rolls at night and bake in the morning?

Yes, you can! There is nothing better than fresh cinnamon rolls in the morning. If you want to let them rise overnight and bake in the morning simply cover the pan and place in the refrigerator after you’ve cut them. In the morning you can remove them from the fridge and pop them in the oven.

Can you freeze cinnamon rolls?

These rolls freeze very well, but I recommend freezing before frosting them. You can freeze them in an airtight container or ziplock bag. They will keep several months.

Do I need to refrigerate cinnamon rolls?

You should refrigerate any leftover cinnamon rolls due to the pumpkin filling and the cream cheese frosting. Make sure they are tightly wrapped. Refrigerated rolls will tend to dry out a bit after a day, but if you pop them in the microwave for 30 seconds they should be just fine.