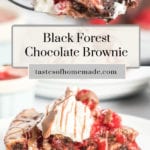 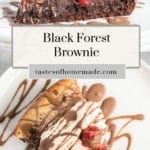 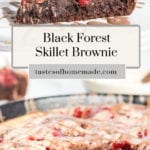 These black forest skillet brownies are made with a simple brownie mix and cherry pie filling. They are fudgy and decedent. These brownies are perfect for an easy dessert, or they can be cut into squares for the lunch box.

I love brownies. They are chocolatey and gooey and pretty easy to make. I think almost everyone is familiar with the classic chocolate brownie.

This recipe takes a classic and elevates it into a decedent dessert by adding a cream cheese swirl and cherry pie filling. Then the whole thing is finished with a chocolate drizzle.

I’ve kept this recipe super simple by using a boxed brownie mix, but if you have a favourite brownie recipe that you’d like to use instead you absolutely can. If you are making your own brownies then you will need a recipe that uses a 9×9 pan.

What is in a black forest dessert?

I’ve adjusted this recipe a bit to better suit the brownies and added a cream cheese layer and used cherry pie filling. I also did not add the kirsch, though you are certainly welcome to add some if you like.

Why bake brownies in a cast iron skillet?

Cast iron is excellent for baking. The heavy pan promotes even cooking and if seasoned well they are non-stick.

With the cast iron pan you get a nice chewy edge and bottom, without burning, and the middle stays super moist and fudgy.

I also think it makes for a fancier presentation if you are serving this as a dessert.

How should I serve black forest brownies?

You could simply cut these brownies into squares, if you like. But to really elevate this dish I suggest serving them slightly warm. I like to slice them into wedges, top them with fresh whip cream, a spoonful of cherry pie filling and drizzle them with chocolate. They would also be delicious topped with vanilla ice cream.

After the brownies are baked, remove from the oven and allow to cool for about 20 minutes, then drizzle with melted chocolate. 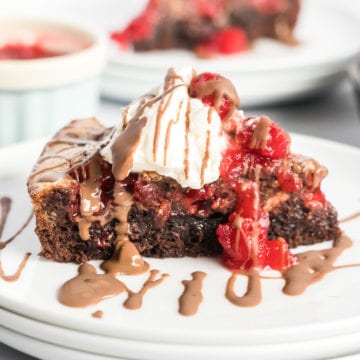 These black forest skillet brownies are made with a simple brownie mix and cherry pie filling. They are fudgy and decedent. Perfect for an easy dessert, or can be cut into squares for the lunch box.
No ratings yet
Print Pin Save Recipe Saved! Rate
Course: Cookies & Squares, Dessert
Cuisine: American
Prep Time: 10 minutes
Cook Time: 50 minutes
Total Time: 1 hour
Servings: 10
Calories: 532kcal
Author: Deanna
Prevent your screen from going dark

Tried this recipe? Please leave a rating and comment below!

Pin this recipe for later!